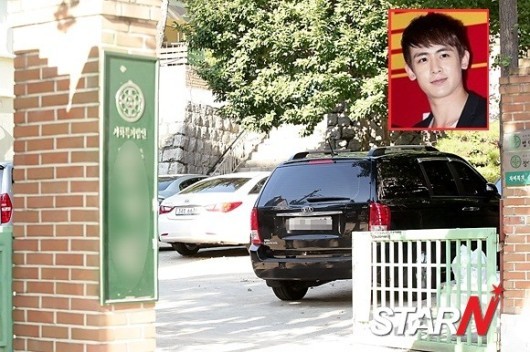 2PM‘s Nichkhun has decided to spend his time reflecting on his actions by doing community service.

It was recently revealed that the 2PM member has been volunteering at a Buddhist welfare facility for the disabled located in the Seongbuk district of Seoul.

The singer, who has gone through controversy this summer for driving under the influence of alcohol, previously expressed that he would take a hiatus from the entertainment industry to reflect on his actions. After contemplating on what community service he would volunteer for, he chose to work with disabled children.

Nichkhun has been visiting the care center and spending time with the children regularly since two weeks ago, showing that this is not a one-time charity stunt for the singer. In addition, it’s reported that Nichkhun may have chosen the facility as he is a Buddhist himself.

Many are noticing his secret act of kindness, but it was revealed that the singer did not want the news getting out publicly. Nichkhun chose to keep his volunteer work a secret as there might be backlash or negative public opinion. As a result, Nichkhun requested to volunteer in secrecy, and JYP Entertainment had agreed to respect his decision.

The staff of the facility seemed very cautious about speaking on the matter as well. One representative stated, “Nichkhun is here as any other volunteer, so it’s difficult to speak on the matter.”

In addition, other employees did not know the details of how Nichkhun spent his time at the care center, however, they did notice that he did not speak much. Neighborhood residents seemed unaware that Nichkhun had been volunteering although he had been visiting for two weeks.

Recently however, the news of Nichkhun’s community service has been spreading through social networking sites. A couple posts on an SNS site stated, “I saw Nichkhun volunteering today and just heard that today is 2PM’s 4-year anniversary. It made me take a second look at Nichkhun who carried out a meaningful act on a meaningful day,” and “This is the Disabled Children Facility. Nichkhun memorized each of the childrens’ names, helped them get washed up, fed them, and cleaned diligently~ He volunteered wholeheartedly,” and more.

The 2PM member’s DUI came as a shock to many fans who loved the singer. However, because the singer came clean about his wrongdoing and took time to genuinely reflect on his actions instead of trying to hide his mistake, many are noticing the sincerity in Nichkhun’s act of service.

In addition, as much as this volunteer act was one he began on his own will, the singer plans to continue until he feels at ease with himself.

Meanwhile, many fans are awaiting Nichkhun’s return with 2PM after his time of introspection.