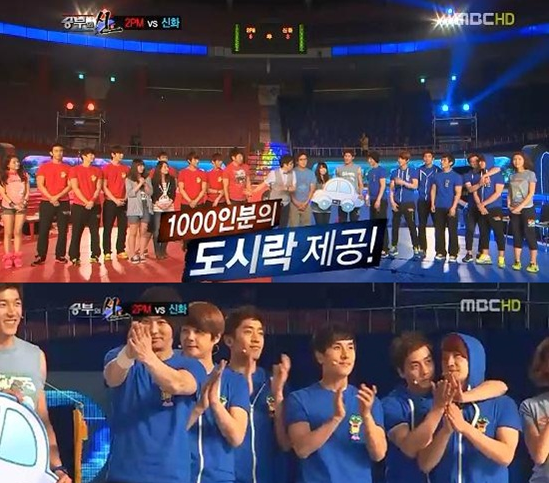 "God of Victory" and the battle between Shinhwa and 2PM finished on a high note.

On the Sunday episode of "God of Victory," the battle between the two idol groups was continued. The final winner was 2PM.

In this episode, they continued their blood-thirsty competition. The score was 4:2 for 2PM and in a game called, "Breaking Chopsticks with Your Butt" they agreed that if 2PM was to win, that they would finish the competition.

In the game, Junho breaks an amazing 28 chopsticks which leads to 2PM's win. And that's how the final winner was decided.

3000 attendees bet on which team that they believed would win. After the last game, only 4 audience members were left and they played a game for them. If Shinhwa was to win, the audience member who cheered for them would win a car.

All in all, the 'Beast Idol Competition' ended with wins for both 2PM and the Shinhwa fans. Both teams finished the game on a high note and there was no real 'loser.'

Shinhwa, as promised, provided for 1000 2PM fans, who attended a 2PM concert, a meal.