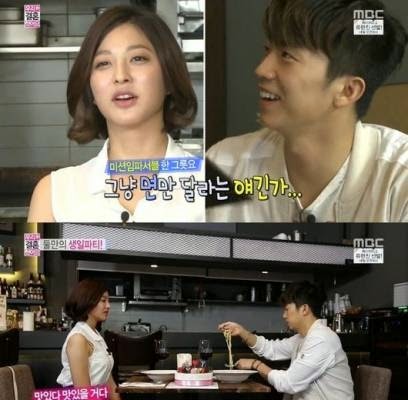 "The best way to a man's heart is through his stomach" would you agree? "We Got Married' onscreen couple Park Se Young and Wooyoung showed sweetness on May 31st episode of the show. Like any women who would like to capture her husband's heart, Park Se Young put an effort to show how he appreciates Wooyoung by cooking for his birthday.

Park Se Young was seen in an office attire that makes Wooyoung smile asking "What's up with your clothes. Did you change your job?" Based on what she wear, she was pretending to be one of the waitress for a classy restaurant, she ordered Wooyoung to look at the menu and order something. Wooyoung pick jalapeno pasta.

Park Se Young shared on her solo interview why she takes an effort in cooking meal for Wooyoung saying "Wooyoung's birthday was on April 30. It's late, but I wanted to congratulate him. Wooyoung said briefly that he'd like it if his wife cooked. When I asked him what he liked to eat, he said oil pasta." Isn't it so sweet? A husband would feel happy knowing that his wife prepare a little surprise for his birthday.

Wooyoung also appreciates what Park Se Young does saying, "I like simple things, and the taste is really simple. It's daebak... Of course, it's delicious because Se Young made it." Very considerate of Wooyoung to complement on what his onscreen wife does for him.