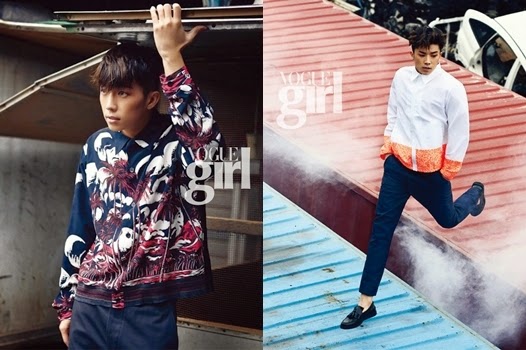 Who would have thought that 2PM's Wooyoung has some bright ideas when it comes to modelling for a photo shoot.

We all know that models follow certain angles and instruction what a photographer what's to have in a photo but for Wooyoung, he showed what he wants to see for himself in a photo shoot. He showed new charms throughout the shoot.

Wooyoung had his photo shoot with Vogue Girl, he base his expression on what the weather dictates that day, cloudy that's why his expression was more serious while on a run down container background. Looks like in an action scene.

But what you see on his photo shoot is what Wooyoung wants as an outcome!

On what the magazine shared while interviewing Wooyoung, he said "Through my seven years of experience, I began to think that it's meaningful to have my ideas be reflected in photo shoot. The most exciting part is coming up with creative ideas." Wooyoung has a lot of ideas that is waiting to be shared like what he does in Vogue. Be sure to be ready for more.

He also shared, "I've been realizing how precious are the things I have been given. I think the fans will like this photoshoot since it's been a while."

Fans of Wooyoung would expect a copy of Vogue Girl on its June issue. Check out what Wooyoung's other ideas for photo shoot maybe you could pick something to apply for yourself as a fan.