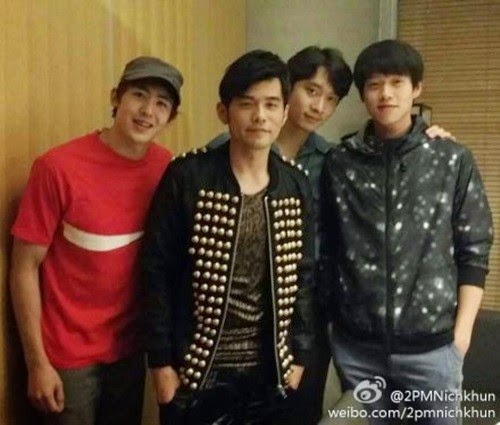 On May 25, Nichkhun of boy group 2PM proved that even stars do get starstruck.

After meeting the Taiwanese singer-songwriter-actor Jay Chou, Nichkhun uploaded on his Weibo a photo he snapped with the singer along with the post, “I met Jay Chou! He was really awesome!”

In the photo, Nichkhun is joined by co-2PM member Chansung and Chinese actor Wei Da Xun.

Wei Da Xun also shared the photo Nichkhun uploaded, adding his comment saying, “Even when I think about it now, I’m still nervous.”

Nichkhun and Wei Da Xun are working together on a Chinese drama called “One and a Half Summer” which starts airing in June. Wei Da Xun has recently signed an exclusive contract with JYP Entertainment last May 23.