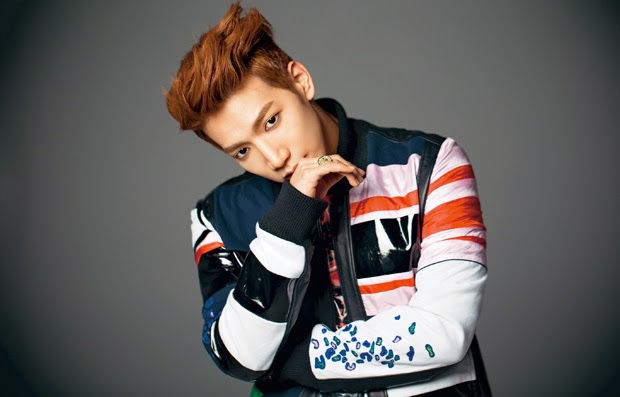 Jun. K (From 2PM)
LOVE & HATE
Asia's No. 1 beast idol group, 2PM, and from that group, Jun.K who is popular as a lead vocal will be releasing first mini album ? It is an album that has variety of music types -- hip hop, R & B, and ballad that leaves a different taste than 2PM's. And the songs are all composed by Jun. K himself! We interviewed him and asked how he feels right now as an artist Jun.K!

Q: What kind of concept did you have in mind when making this album?
It's not a concept, but rather the songs I like packed into one. I think my image in 2PM as a lead vocalist is strong but in my solo album, I rap and there's a song that harmonized along with an orchestra. I wanted people to know that "Jun.K has this kind of color and musicality!"

Q: The title song <LOVE&HATE> has strong impact hip hop style. Even the lyrics uses strong words like 'betray' or 'lost.' Why did you choose a song this strong as a title song?
About this song, I had the title in my mind, so I made a song with the idea in mind... you know there's something about loving someone but also hating them, because you know that even though you love each other, you know someday you will be betrayed and they will leave you but you want to return the love from that person. I wanted to express that kind of emotional conflict.

Q: Is that from your personal experience...?
I did not make the song based on certain experiences. I just imagined something that everyone might have experienced. There's some things you won't understand when you're in a relationship, but important thing is to believe your partner. I included a message "Are you believing?" in this song.

Q: Then what's the song you want ViVi reader's to listen?
If it's ViVi reader's age generation, it's the time when you are in love so I think <With You> is nice. It's a song that's romantic, full of energy, and it's a positive song. How's my suggestion? Did I make a good one?

Q: I think it suits our readers perfectly! However, when you think of Jun. K, you not only have written and composed songs for 2PM but also for other projects and soundtracks. You've showing your talent as a creator. I heard you have a lot of songs that you've made but is not yet released, including this album.
If I include the songs that is not completed yet, I can't count. I can't predict when the melody comes out, when I'm having a meal, shower time, in toilet... That's why I record the melody immediately with voice recorder in the phone. Then I arrange it at the studio. Of course, I'll be in trouble if I lose my phone so I always make copies as a back up.

Q: Then what kind of song will you make and give to a woman you like?
Like the song I made for Nichkhun's solo <SO WONDERFUL>, a cute song. For this song, I was imagining Nichkhun's face while making it and the phrase, "You are so wonderful," came out. After that the melody just came out. Oh, but it's not like I'm in love with Nichkhun! (sweat)

Q: The way he denies it is so cute and it's a different image from the cool and manly appearance on the stage. And Jun. K has strong preferences on fashion, as he is famous as the number one fashionista among the members. Because of that, he has strong desire to show individuality -- he even made a costume for album jacket by himself!
I came up with the idea by myself and we had many meetings, so I took the time to make this [the costume]. Maybe it would be easier if we use something that already exist, but the thought of someone wearing the same thing is something I can't bear.

Q: Even so, it seems like he has a clear preference about fashion on women too.
The style I like and never changes is women in skinny jeans. It's really nice. But what I like recently is like the one in ViVi last month, the combination of a dress and a denim jacket. I like ViVi because it seems like it's always the first on catching fashion trends -- even the readers dresses well and it's very cute... good vibes! (laughs)

Q: Jun. K who praised the ViVi like that. Don't you feel lonely since you will have solo concert from May and solo activities quite some time?
It's okay. I'm a person who can enjoy loneliness. (laughs) Besides, finally I was given a chance like this after doing 13 years of musical activity. I think I should concentrate and do it until I can't even think that I'm lonely. I will do my best and work harder to show you guys more of Jun. K, so please give the love!