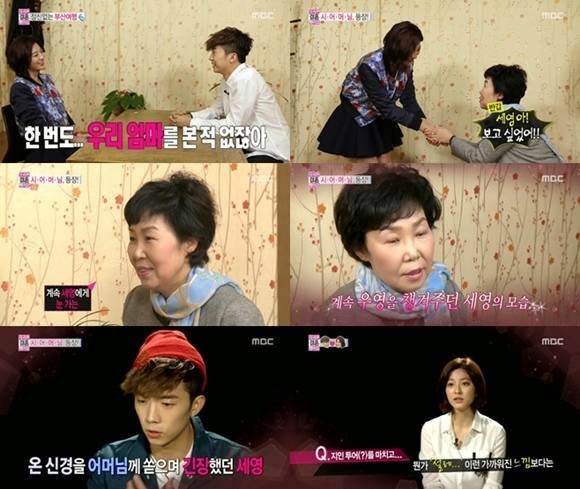 The May 3rd episode of 'We Got Married' continued with 2PM's Wooyoung and Park Se Young on a date on the streets of Busan.

The couple met up with Wooyoung's past friends and even visited his former teachers and school where he was caught off-guard by his grades. He said, "I wanted to introduce Park Se Young to the important people in my life." He later took Park Se Young to meet his mom at a restaurant, which the actress wasn't prepared for.

Wooyoung's mother commented, "Park Se Young was so pretty. I adored her because of how she leads Wooyoung and takes care of him. She looks very pretty and dignified, and she's not flippant at all. Everything about her was pretty." Despite being nervous, Park Se Young and his mom got along well.

Wooyoung shared during his solo interview, "It was so cute. She was really nervous about talking to my mom. I thought it was really cute. I felt really happy seeing them," and Park Se Young revealed, "I feel like I got a lot closer to Wooyoung as a husband."