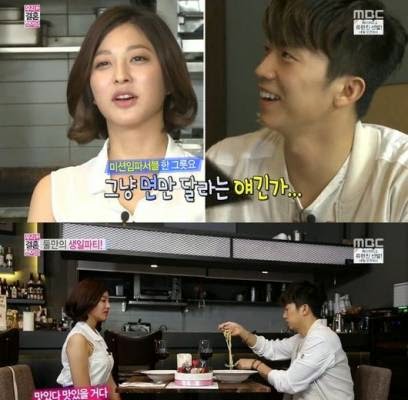 Park Se Young surprised 2PM's Wooyoung by cooking him a birthday meal on 'We Got Married'.

On the May 31st episode, Park Se Young appeared wearing an office look, which Wooyoung seemed to enjoy. He said smiling, "What's up with your clothes. Did you change your job?" She then asked him to order something from a menu she prepared, and he chose jalapeno pasta.

Park Se Young said during her solo interview, "Wooyoung's birthday was on April 30. It's late, but I wanted to congratulate him. Wooyoung said briefly that he'd like it if his wife cooked. When I asked him what he liked to eat, he said oil pasta."

Wooyoung commented, "I like simple things, and the taste is really simple. It's daebak... Of course, it's delicious because Se Young made it."