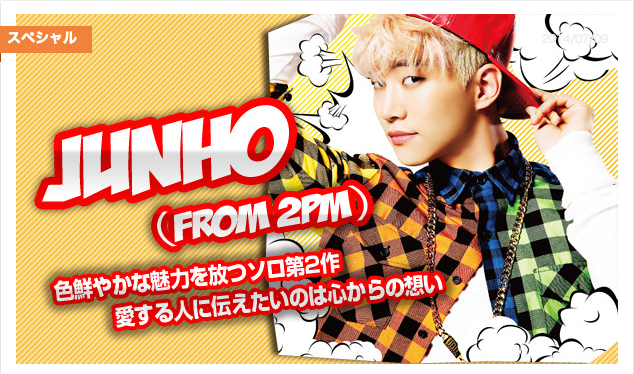 JUNHO (FROM 2PM)
The thriving, bright coloured charm of his 2nd solo piece
The inner feelings he wishes to convey to those he loves

After a year since his 1st solo mini album <Kimi No Koe>, JUNHO (From 2PM) is back! The fans’ long anticipated 2nd solo mini album <FEEL> was officially released on July 9. Similar to his previous mini album, he participated in many roles, from writing the songs to composing to producing; it’s filled with sparkling dynamism! From upbeat to medium-tempo and ballads, etc - each of the 6 songs shine with individual charms. Interviewing Junho, he said, “I wanted to attempt producing various types of music. I wasn’t too worried.”

[I want to express my current feelings and emotions. I don’t want to be restricted to any particular genre]

- This is a piece of work produced after 1 year, what feelings are included in this album <FEEL>?
Junho: Following the previous one, this time I also produced this album, expressing my current feelings, building from my current situation as well as the values and way of thinking that I’ve obtain as I get older. If I were to say that the previous album <Kimi No Koe> was more casual and refreshing then, <FEEL> is filled with a trendier and a more energetic feel. I want to listen to a more varied range of music as well as attempt to write them. That is why I try not to be restricted to any particular genres whenever I’m producing.

-  Because there is the sound transition and a certain melody, we could feel the high-quality POPS you wish to achieve.  I think that courage must be required to challenge such different music styles.
Junho: I don’t feel too anxious, because it hasn’t been that long since I started to produce my own music, I still have a lot of excitement building up inside of me and I have a strong desire to turn those emotions into reality.

- Regarding self-producing, did it go smoother compared to the last time?
Junho: Because the previous mini album was my first time, I along with the staff was very cautious and played it safe. This time, although the production time was much shorter, we still worked very smoothly and successfully. Never have I felt that composing was hard work, I was able to really enjoy the production process.  Once the album was completed, I also felt a huge sense of satisfaction.

- So it’s an album where Junho was able to fully enjoy producing and complete.  Are there any areas during composing or writing songs which requires extra attention?
Junho: Regarding the songs, I always pay attention to whether the music can express my feelings well or not. This time I also worked alongside with Hong Jisang (composer) while composing. There are times where after I’ve created a melody to a certain extent, we’d exchange our opinions later to complete the song.  Yet there are also times where we both start composing from the beginning together. Regarding lyrics, <Next To You> are the thoughts that I wanted to express the most, because it is my own story. Because it’s the first time I’ve written a song for my family, the fans and to the people I love, I thought it’d be good if I could convey these thoughts to them well.

- I think that as there was little time for producing, focus is extremely important. What did you do to increase your concentration level?
Junho: Firstly, whenever I have the time, I’d go to Hong Jisang’s studio.  I basically eat there too (laughs). To me, his studio is a very comfortable place to be in. Before working together to produce my albums, Hong Jisang and I were already very good friends; he has an older brother-like presence. The two of us would go out to play and work together. Because we spend a lot of time together, we have a friend-like relationship also.

[Although I can endure sleepiness, I cannot endure hunger (laughs)]

- During the production process this time, did you notice anything new?
Junho: I know that although I can endure sleepiness, I cannot endure being hungry at all (laughs). Also, although this isn’t something I noticed this time, I can’t force myself to do something when I can’t. Even if I do force myself to do it, I’ll give up eventually. When I listen to it the next day, it would be terrible.

- Is there a menu Junho wishes to have to fill his hunger?
Junho: I often go to the noodle shop located next to the studio (Korean noodle dish cuisine). It’d be the shop we visit most often. Also, I go to a place called Gunja-dong, there are many good restaurants around that area. We would be walking around and then say, “Today, let’s eat here!”

- That sounds fun! Then if you were to express <FEEL> with a colour, what colour would it be?
Junho: Rainbow coloured.  Because there are many different colours grouped together. I would like to think that it has a very bright, colourful and sparkling feel (laughs).

- It seems like the rainy season will have stopped once the album is released. Could you recommend a song from this album which is suitable for summer?
Junho: Of course it would be <FEEL>! Not only for its one-way beat and trendy sounds, but I made this song for people to be able to feel that longing sensation you have for someone. I think that if you listened to this song in the summer, it’s also a melody that can lift people’s mood.

- There are various scenes in the MV, with the streets and club, etc.
Junho: The MV was also my idea. I wanted to involve a fantasy element between the scene transitions. That’s why there is no developed story within each scene; I wanted it to integrate with the transition of the melody.

- Additionally, do you think up-beat songs or ballads suits you the most?
Junho: Actually, I have thought about which song styles suit me the most. Because I do not listen to any particular genres, instead I listen to a large range of music, so I like many genres and that makes it difficult to decide. Songs which are more easy to sing and can be sung cheerfully are ones such as <SAY YES> and <HEY YOU> which I released as a member of 2PM. <FEEL> and <Dangerous> in this mini album, I think those songs which would take into consideration the change of expression depending on how I wanted to perform them.

- Lastly, what do wish the audience will feel from listening to this album?
Junho: The current me, and my heart. As I’m continuously working hard in order for everybody to feel, “FEEL” even more during the concert tour, I hope everyone will anticipate it!