[News] Decline of the old, rise of the new generation in fan cafe memberships Although many fans these days are closely connected to their favorite stars and get quick updates wherever they go through modern SNS sources such as Facebook, Twitter, and Instagram, there still exists the ever significant and symbolic go-to source, the fan cafe!

As a lot of the fan cafes are operated by the agency, it is one of the best places to get quick updates on the stars and their events, so they are as popular and widely used as ever. Regardless, there definitely is some sort of a change rippling through the fan cafe sphere as a recent comparison in membership counts among select idols from May 2013 to July 2014 show that an interesting trend is occurring.  Media Outlet 10Asia recently compiled the data and you can see the results below. 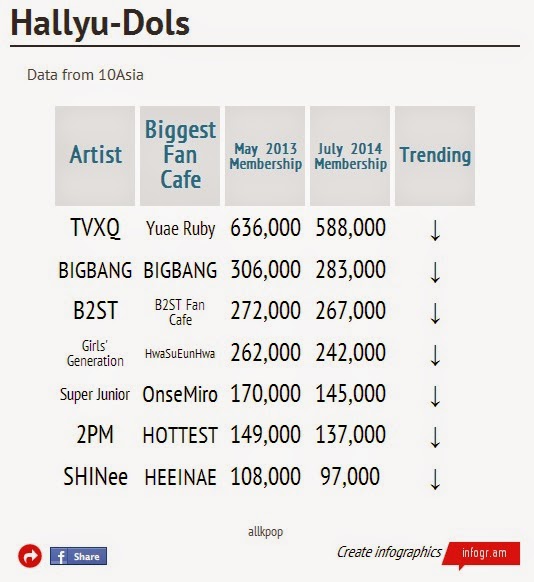 As you can see in the chart above, the old generation idols, called Hallyu-dols, that have been active before 2009 have decreased a good amount in membership numbers--not too much to cause alarm, but noticeable enough to raise some eyebrows.  Of course, some of the super top names still have way more members than the Trending-dols in the chart below, but this does raise questions about whether this trend will continue to the point that even those big names will eventually lose out to the more recent bout of K-Pop idols. 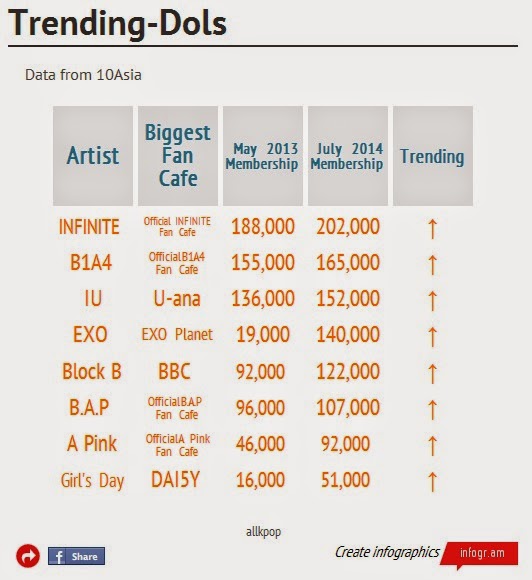 Meanwhile, many idol groups have debuted since 2009 and have gradually started to establish themselves in name and fame, although they are not yet set as much as their senior groups; hence, they are called Trending-dols, the trending idol groups at the moment that include popular names like INFINITE, Block B, and Girl's Day.  INFINITE has grown incredibly to the point that they now have more fan cafe members than Super Junior! Of course, this is not an indicator of popularity as fans now look toward other methods and sources to stay in touch with their favorite artists.  However, that does bring into question why INFINITE still manages to rake in the members through this older, more traditional source of celebrity-fan connection.  In addition, Girl's Day has increased by more than three times what they had a little over a year ago, so things are moving quickly! 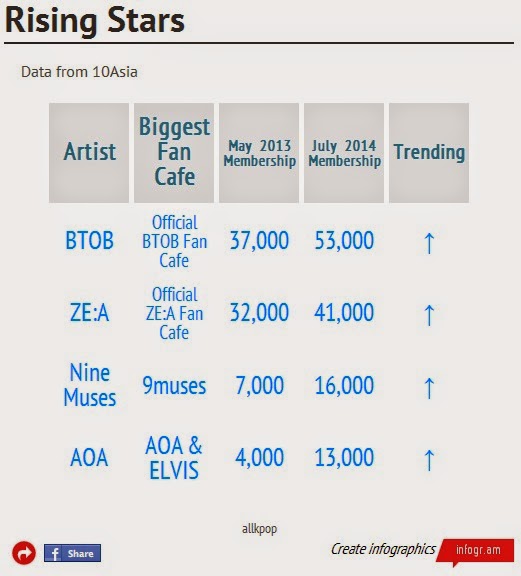 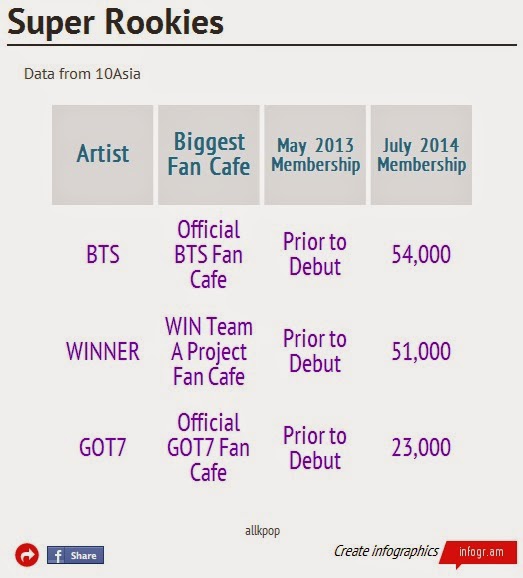 Meanwhile, there are the Rising Stars and Super Rookies.  The Rising Stars are still not up to the standards of the Trending-dols in fan cafe membership, but they are still growing steadily and at a good pace with Nine Muses and AOA more than doubling their membership count during the set time frame.  Meanwhile, the Rising Stars have already been caught up by the Super Rookies, who debuted after May 2013 (or not even yet in the case of WINNER), but proved to have monstrous popularity from the get go.

What are you thoughts on this interesting phenomenon?

Artikel Terkait [News] Decline of the old, rise of the new generation in fan cafe memberships :