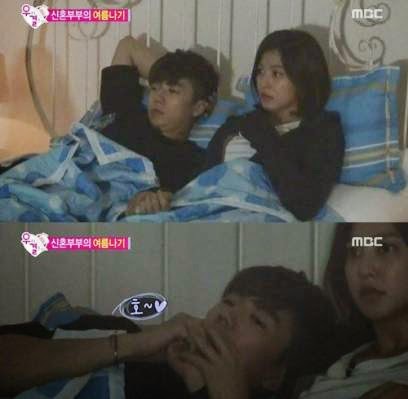 2PM's Wooyoung and Park Se Young cuddled up while they watched a movie on the July 19th episode of 'We Got Married'.

They started out the episode by doing things the other didn't want to do. Park Se Young got Wooyoung to wash blankets with her, while Wooyoung asked Park Se Young to practice the choreography for their duet "Holding Hands". The couple then had some beer with snacks, and Wooyoung asked his onscreen wife to drink more often with him.

The two ended the night on a romantic tone by cuddling in bed and watching a horror film. Though the actress tried to scare him with a fake hand, she was unsuccessful.

How cute are they?!

Artikel Terkait [News] 2PM's Wooyoung and Park Se Young cuddle up to watch a movie on 'We Got Married' :