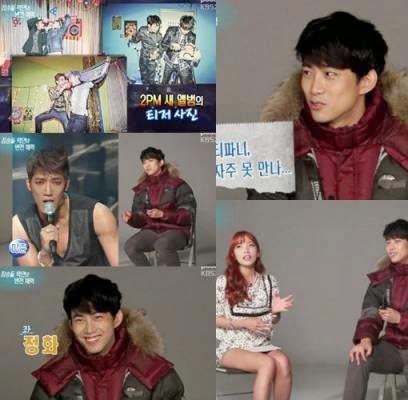 2PM's Taecyeon commented on Nichkhun and Tiffany's relationship, his own dating style, and more on the August 30 edition of KBS 2TV's 'Entertainment Relay'!

On the subject of acting out a romance, reporter Rainbow's Jisook asked, "Among the members, Nichkhun is in a love-love relationship and who else?," which didn't fluster Taecyeon who pretended not to hear the question correctly. She asked, "Aren't you jealous?", and Taecyeon shared, "To be honest, I don't think there's much to be jealous about. Even if you go public [with a relationship], they're all busy so I know that they can't meet often." When asked about his own dating style, Taecyeon commented, "I don't know because I'm an idol. [All jokes aside], I think [my dating style] always changes, depending on the person."

During the quiz segment, when asked, "If you had to choose only one member to go on a vacation with, who would you go with?", Taecyeon answered, "I won't go! I won't go with 2PM!", but revealed that if he absolutely had to pick, he would go with Chansung. He explained, "If I go with Jun.K, I feel like I will have to take care of him. If I go with Nichkhun, he will attract a large crowd of people. In Wooyoung's case, he is studying English so I feel like he would ask me too many questions on English. Junho loves Korean food so if he goes overseas, he always has to eat Korean food so the only person left is Chansung."

When asked who he'd like to collaborate with, Taecyeon also chose Uhm Jung Hwa and Kim Wan Sun. In response to the question, "What will 2PM be like in ten years?", Taecyeon answered, "In ten years, 2PM will be old. I don't think we will be able to perform powerful dance moves like we can now so if we do our best until then, we might become a ballad group [later on]. We will work hard to practice our singing."