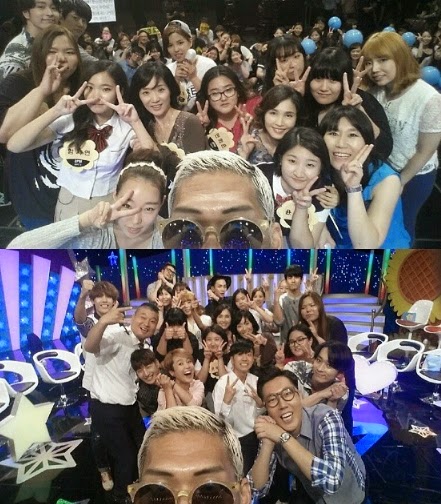 g.o.d will be appearing on MBC’s Star Gazing.

On August 26, g.o.d’s Park Jun Hyung posted a picture on his Instagram and wrote, ‘Two shots with MBC’s Star Gazing family members, 2PM brothers, ‘fangod’ and ‘Hottest’ members! I had fun and everyone worked so hard, man~’

The revealed pictures show Park Jun Hyung, Song Ho Young and Kim Tae Woo posing with everyone in the studio after recording the show.

About Taecyeon and Mir, who are widely known as huge fans of g.o.d, Hwang Kyo Jin PD said, “The two are big fans well recognized by g.o.d. They knew the stories that even the fans didn’t know. The g.o.d members were shocked and even asked them ‘Are you guys our stalkers?’ The filming took place in a really good atmosphere.”