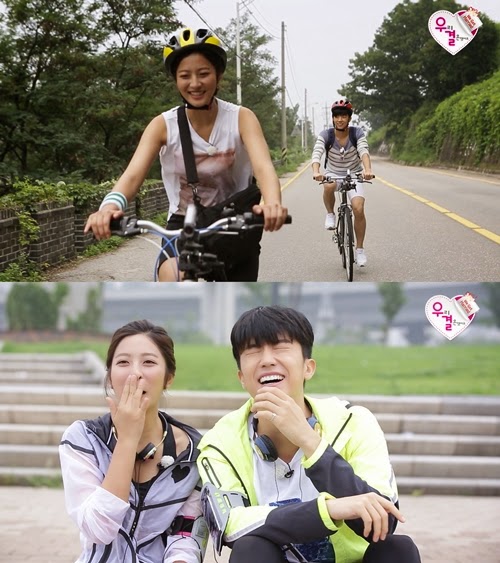 2PM’s Wooyoung and Park Se Young couple, who recently moved into a new house in the middle of the city, enjoyed a romantic bike ride.

During a recent shoot for MBC’s We Got Married, Wooyoung and Se Young went on a morning jog near the Han river, as they expressed their happiness over moving into their new house.

During the jog, the couple received a mission ‘to go on a special summer vacation trip’ along with 500,000 won.

Excited to carry out the mission, the two decided to go on a bike trip, which they have always wanted to take. After finishing their romantic bike ride, Wooyoung and Se Young headed to enjoy a luxurious meal consisting of broiled eels.

Making an eel wrap for Wooyoung and putting it into his mouth, Se Young said, “Eat the tail and get your energy up,” which reportedly made Wooyung nervous.

Se Young then suggested that they try paragliding but hesitated upon finding out its unexpectedly high price.