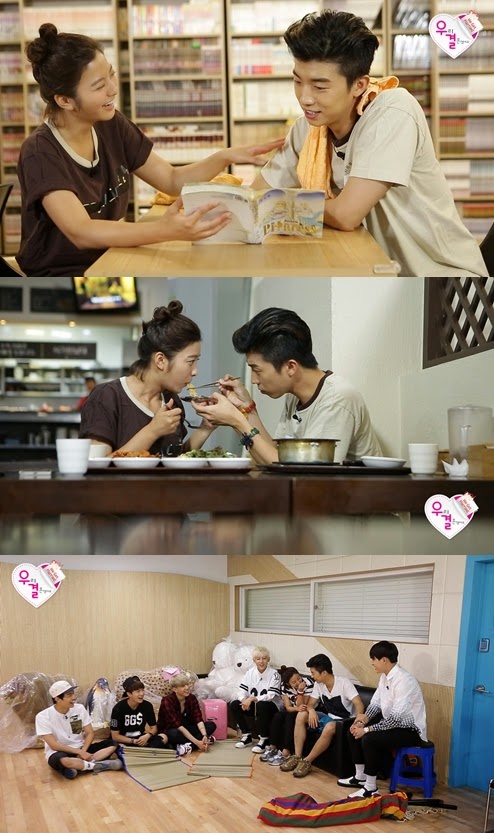 2PM’s Wooyoung and Park Se Young became homeless due to the termination their of housing contract on We Got Married.

During a recent shoot for MBC’s We Got Married, Wooyoung and Park Se Young had to move out of their house and temporarily move into JYP’s practice studio in the basement.

After setting down their belongings in the basement, the virtual couple sat on the couch as they worried about where they should move.

Then the GOT7 members, who are Wooyoung’s junior singers at JYP, rushed into the studio to practice their choreography.

Revealing themselves as fans of We Got Married, the GOT7 members started throwing questions at Wooyoung and Park Se Young, catching them off guard.

Then once GOT7 started practicing, the two made their way to the Jjimjilbang (public bathhouse and sauna) to not distract the GOT7 members.

In order to pass their time in jjimjilbang, Park Se Young suggested a board game to Wooyoung and they started playing the game, setting ‘drinking persimmon vinegar’ as the punishment for the loser. Wooyoung, who lost the first couple games and had to drink the persimmon vinegar, reportedly suggested another game out of spite.

Stay tuned for the episode airing on August 2!