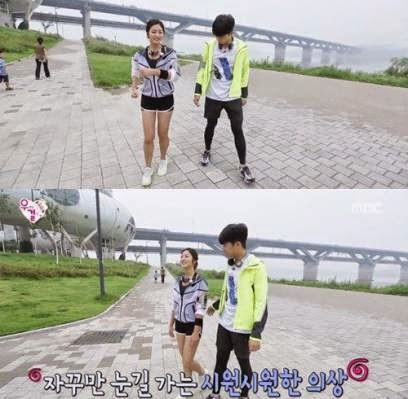 2PM's Wooyoung and Park Se Young went on a healthy biking trip on the August 23rd episode of 'We Got Married'.

Park Se Young and Wooyoung started the healthy theme of the episode by going jogging next to the Han River. The 2PM member said, "My wife has a nice body," making the actress a little shy. The two were ecstatic when they received a mission to spend money for a summer trip.

The couple then traveled by train and enjoyed a nice date on bikes, making sure to keep up their energy by eating grilled eel. Park Se Young also planned for the two to go paragliding, but she made sure to keep it a secret until they got to their destination.

It looks like things are heating up between the two on next week's episode, so stay tuned!

Artikel Terkait [News] 2PM Wooyoung and Park Se Young go on a biking trip on 'We Got Married' :