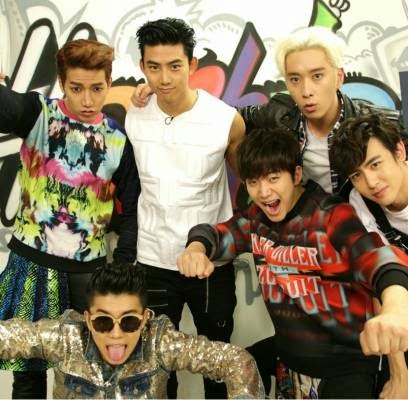 2PM opened up to HOTTEST about their comeback during their 'hashtag' interview with 1theK!

2PM chose #AreYou_Crazy (the Korean title for "GO CRAZY!") as their 1st hashtag and shared what they're crazy about these days including Wooyoung, who has been crazy about motorcycles, and Jun.K, who has been crazy about checking fans' response to their comeback. Jun.K explained that the reason for his obsession with checking comments and rankings is because he wrote the title track so he feels the responsibility to make sure that their comeback is a success.

For their #Party_Tonight hashtag, they announced that they'll get closer to fans through their guerilla concert promotions and revealed Jun.K to be the member who knows how to have a good time the most. For the #Hangover hashtag, the members also revealed that Wooyoung once got so hung over that he threw up on his bed.

They also chose #Go_Crazy and #6thAnniversarySinceDebut as their hashtags and shared how they always feel sorry and thankful to the HOTTEST who have been patiently waiting for them to promote in Korea.