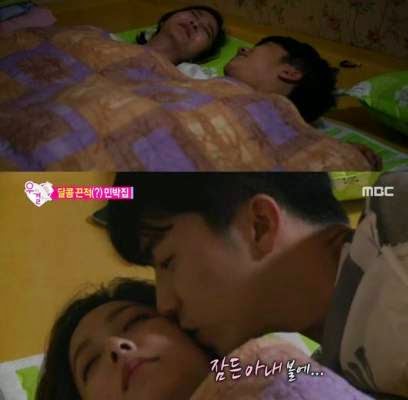 2PM's Wooyoung planted a kiss on Park Se Young while she "slept" on the September 6th episode of 'We Got Married'.

After their outdoor adventure, the Wooyoung-Park Se Young couple spent the night together. Wooyoung asked for a kiss in a roundabout way, while Park Se Young shyly avoided the question. He said, "You think I can't do it," and later planted a kiss on her cheek as she supposedly slept.

The next morning at their newlywed home, Park Se Young got up early to make a vegetable smoothie for her onscreen husband. While they both tried to get the other one to drink the not-so-tasty smoothie, a package with Chuseok gifts arrived. The couple wore the traditional Korean clothes given to them and made video clips for both their parents.

Artikel Terkait [News] 2PM Wooyoung kisses Park Se Young in her sleep on 'We Got Married' :