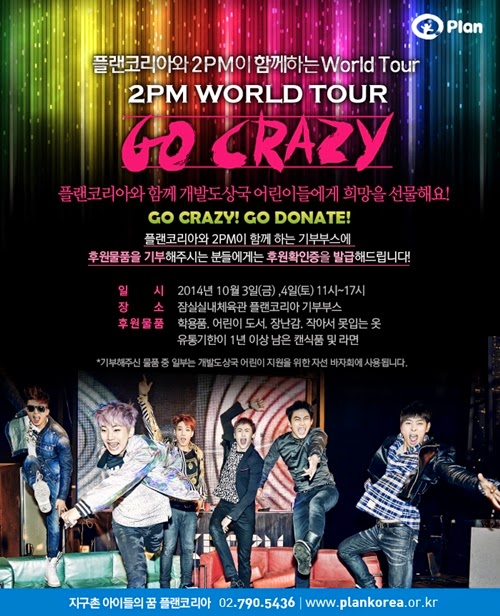 2PM will be reaching out to help out children in developing countries along with the International Children’s support group, Plan Korea.

According to Plan Korea, donation booths to support children in developing countries will be set up and operated during 2PM’s World Tour Seoul concert, which will be held over two days on October 3 and 4 in Jamsil Arena.

An affiliate of Plan Korea stated, “The donated goods from the fans as well as the specially donated goods will be given out to the children in the countries which will be hosting 2PM’s world tour concerts. We’re happy to be able to convey Plan Korea’s ambassador 2PM and their fans’ warm hearts to the children who cannot even enjoy the fundamental rights.”

Plan Korea’s donation booths to be operated during the upcoming concert will not only be taking donated goods but carry out various donation events, establishing a foothold to provide realistic aid for children in developing countries.

Meanwhile, the tickets to 2PM’s upcoming world tour Seoul concert have been completely sold out.

2PM released the 4th full length album Go Crazy and has been carrying out active promotions and it will be carrying out the world tour concert in major cities around the world after the Seoul concert.

Plan Korea is the Korean branch of Plan International. Over 21 supporting countries, including South Korea, England, America and more, have been supporting over 1.5 million children and 9 million citizens in 50 developing countries.