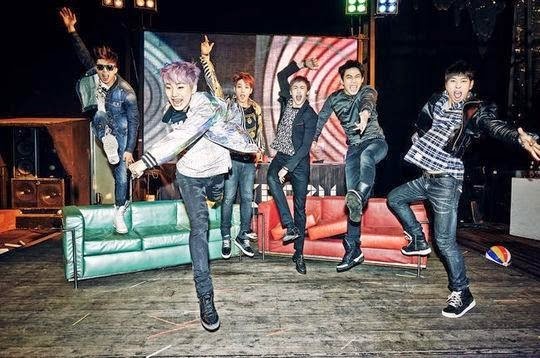 Boy band 2PM held an autograph-signing event for fans on September 25 in Apgujeoung, Seoul to celebrate the release of their fourth studio album, "Go Crazy."

The six-member idol group interacted with 100 randomly selected fans from Korea, Japan, China, Thailand and Malaysia, according to the Korean publication Osen Entertainment.

"We're so thankful to the fans that were able to make it out today. We hope you guys keep warm, stay healthy and happy until we meet again. We love you," stated the members of 2PM.

2PM will be releasing the Grand Edition of "Go Crazy" on September 29 after three remix versions on their album were recently determined as "unsuitable for broadcast" by the Korean network KBS.

"We were concerned it would negatively affect the mental states of teens," KBS announced in a statement, according to the Korean publication Naver.

2PM had initially submitted only their title track, "Go Crazy," for review and had to alter their lyrics to fit the broadcasting guidelines. The single was given approval by KBS after the second review, according to the publication Allkpop.

Although the K-pop group is receiving backlash for the content of their recently released album, 2PM has been dominating music charts with "Go Crazy" in both Korea and Japan.

2PM was seen ranking No. 1 and No. 2 on the Tower Records Combined Sales Chart. The album came in at No. 3 on Oricon's Overseas Album Chart as well.

The six-member K-pop group's recently released album debuted at No. 1 on the weekly chart for the Korean music site Soribada, according to the website Yahoo Entertainment Singapore.

2PM's eighth Japanese single, "Midarettemina," was also seen taking up the No. 3, 4 and 5 spots on Japan'sTower Records Combined Sales Chart, according to the media outlet Star N News.

The music videos for 2PM's Japanese and Korean single have been very popular amongst fans as well.

"Both Korean ver. and Japanese ver. are cool and addictive. It's hard to choose lol," wrote YouTube user vinne anggia.