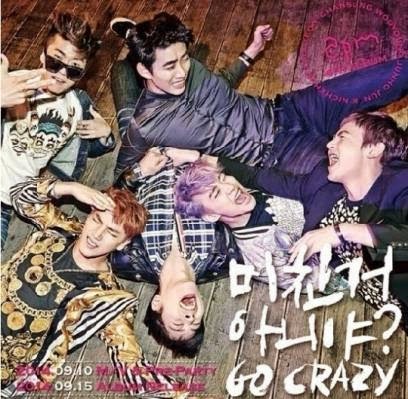 It has been revealed that 3 tracks from 2PM's 4th full-length album, 'Go Crazy', has been deemed unsuitable for broadcast by KBS.

According to the KBS music review results on the 24th, 3 tracks from 2PM's 'Go Crazy' (Grand Edition) including "GO CRAZY! (djnure VS. Fingazz Remix)", "GO CRAZY! (BOYTOY Vibe MIX)", and "GO CRAZY! (BOYTOY Crazy MIX)", were deemed unsuitable for broadcast. This is due to the remix versions containing original lyrics of the song that directly refer to getting drunk and going out and getting crazy.

KBS revealed that this is the third time the group has requested for review. The first time was for their title track, for which KBS ruled against due to the content of the lyrics as mentioned above. The group modified the lyrics right away and submitted a request for a second review, for which KBS gave the okay.

This third request for a review was for the entire album, which happened to contain the remix versions of the title track without the lyrics that hadn't been modified.

KBS explained, "We were concerned that it can discourage the sound mental states of teens... 2PM submitted their full-length album for review for the 3rd time, and the lyrics and music that were deemed unsuitable in the 1st round of review remained as is [in the remix versions]."