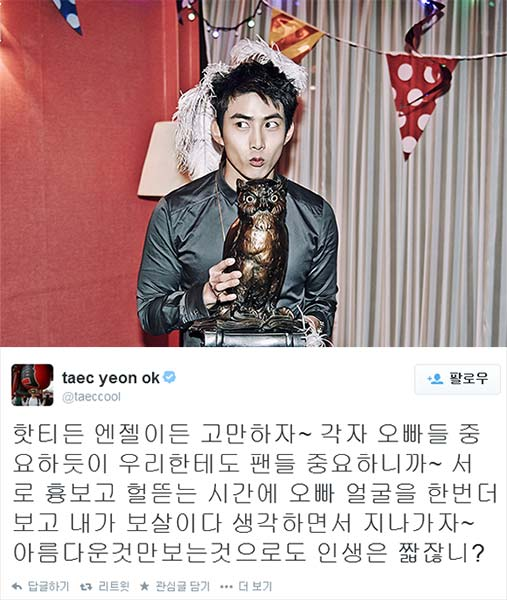 With accusations and rebuttals being thrown all around, 2PM’s Taecyeon asked both fans of 2PM and Teen Top to stop arguing.

On September 29, Taecyeon tweeted, “Whether Hottest or Angels, just stop~ Just as the oppas on both sides are important, the fans are also important to us too~ During the time you guys are cursing and bashing each other, look at the faces of oppa and think, ‘I am Bodhisattva’ and move on~ Life is already short enough looking at only beautiful things, right?”

The issue became greater when 2PM’s Jun. K ambiguously posted on his Twitter on September 28, “Sajegi? Everybody knows,’ bringing the issue of sajaegi into light.

Although the tweet has since been deleted, it has still fueled the fire between the 2PM and Teen Top fandoms, who argued about the manipulation album sales and music charts to win the number prize on music programs.

No such deed has been confirmed, but the arguments between the fandoms have increased in the past few days, pushing Taecyeon to tell fans to stop arguing and focus on better things in life.